Yep – It’s another longish read, So
I hope you have the time to let it sink
in, Cos I believe it might help.

Answer: Nope!
Just a change in direction as mentioned, Simon
wants to work harder while I want to slow down.
Slowing down isn’t packing it in. I’ve just
moving in a different direction and at a slower
pace to suit my lifestyle goals.

Anyways…
All those questions, and some comments about
‘Not blaming me for quitting when everything
is so hard’ lead me to digging out something
I wrote a long time ago, that I’ll share again
today in the hopes that it motivates anyone who
is finding things difficult = NOT to Quit!

Firstly:
You’ll be pleased to know that the
Space Invaders didn’t make it through !!!

Earth Is Safe for another day!

Although we had to sacrifice ourselves at
least 16 times (each) – we did manage to
‘Save The Planet’ – So you’re all safe for now. 😉

We were nearly late for our dinner due to
him not wanting to ‘Give Up’ until we had the
‘Presidential Medal’ awarded.

And that brings me to my ‘Ramble’ for today….

How many times do You keep on keeping on ?
Do you realise that the Only way you can ever
Really Fail – Is to Quit!

After all – if you haven’t quit yet – then
you’ve not failed….. you’ve just learned more
ways something doesn’t work!

And that’s a positive isn’t it ?

Because the more ways you learn that something
wont work – the closer you’ll get to a way
that it Will. 😉

No Way was my little mentor letting the
Mother Ships defeat us – he wasn’t about to quit…
He knew the reward would be worth the struggle.

He had a goal in mind, and every set back
was just another learning experience.

At one point the odds were very much against us,
but we worked as a team – each of us doing our bit,
and at the same time trying to help each other
gain more ‘shields’ and ‘double shots’ etc…

There seems to be so many similarities to life
for me…
We each want to improve ourselves, our circumstances,
our achievements, yet we all need help from time
to time.

Sometimes it looks like we’ll never make it …
Then someone gives us another nudge, maybe shows us
a different way of doing something, and we have
another small success.

We pass on information which we hope will benefit
us all, and when we’re really stuck – hopefully
– we all know someone who can guide us through
the next level.

Are you still with me guys?…

I hope I haven’t lost you …lol

The BIG point to all this Ramble – Is to emphasize
that you should never quit.

Here’s another quick history of someone else’s
career that you may have heard before.

Nevertheless – I think it’s one that’s worth
reminding ourselves of:

This Guy FAILED in Business…

Two Years Later He FAILED and was defeated for Legislature

One Year Later He Again FAILED in Business

The Following year SUCCEEDED to be Elected for Legislature

A Year Later His Sweetheart Died

That Lead to the following year having a Nervous Breakdown

Two Years Later He FAILED and was defeated for speaker

Five Years Later He FAILED and was defeated for landofficer

The Same Year He FAILED and was defeated for congress

Three Years Later he SUCCEEDED and was Elected to Congress

Two Years Later He FAILED to get Re-Elected

Seven Years Later He FAILED and was defeated for senate

One Year Later He FAILED and was defeated for Vice President

FINALLY in 1860 He SUCCEEDED in becoming —

–President of the United States

I guess by now you know I talking about Abraham Lincoln.
(Even us Yorkshire folk have heard of him…lol)

Apparently – he was just a simple, uneducated,
country boy – Who refused to allow his circumstances
stop him.

He wouldn’t accept failure – he just learned from it.

He wouldn’t quit even when it looked like nothing was
going his way.

He just kept learning, and kept going after his dream.

So what’s Your Dream ?

Are you ready to quit?…
Or Are you learning from the failures and moving on?

Have you joined any groups or lists where people help you,
where you can move forward together?

I’ve mentioned it before, and I doubt it’ll be the last
time I say it …lol

You Haven’t Failed Until You Quit!

So if you’re not ready for quitting –
You’ve just learned more lessons on the road to success!

Well that’s it from me today

Now go find an 8 Year Old to learn something from 🙂

It’s the one I’ve helped with for over 7 years, and
Frankly – Those who get involved and NEVER QUIT,
have all had success through following this.
(Honestly – the only folks I’ve seen NOT succeed
are those who didn’t follow through to the end…
maybe they didn’t quit, and just moved on to another
shiny?) 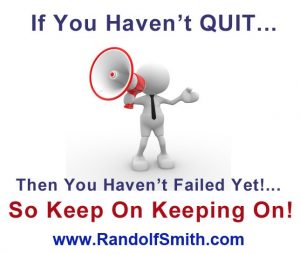 1 Response to "Never Give Up, Lessons from an 8yr old!"